A new Jean Rollin book and vinyl set is getting ready to come out! 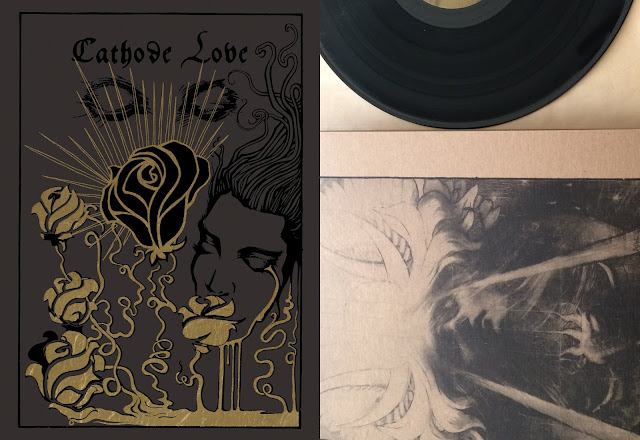 Here is part of the official press release on CATHODE LOVE:

"Cathode Love is a BOOK & LP focused on the fantastique, the impulse of mystery, horror and eroticism, containing essays, short stories and unreleased or exceedingly underappreciated and brilliant works of writing and music, rare soundtrack and musical materials all on the LP. It is designed to work together. Full details are below. The editions are to make the experience affordable to all. The book and LP are the same contents, but they have very different levels of intensity in terms of presentation!
BOOK CONTENTS:

This boxed set, book and LP, is an abandoned cathedral full of little prayers to directors Jean Rollin and Jess Franco, little songs from Count Stenbock and Théophile Gautier, all with colorfully darkened windows for its light source, singing its praises through a cloud of smoke, death, beauty, and WONDER. Essays on Roger Callois’s “Writing of Stones” push language into the permanent, primal and automatic, encountering others, such as the macabre oppulence and romance of Baudelaire's "unnatural" poetry of decadence, death and lust. New Coptic translations and a lovely new and insightful essay along with lyrics to his work Birth Canal Blues are offered up by the beautiful and visionary artist David Tibet. A wonderful essay by Stephen Thrower, with his incredibly perceptive and loving reading of the under-sung and mesmerizing Lorna...The Exorcist, all these coupled again with broader, essential selections on the actual processes facilitating these arts, in the essays on the metaphysics of theater by Antonin Artaud, or a variety of other works reflective of the falling shards of some Greater Mirror, then shattered and now gathered again, all that cut to the root of visual poetics. In this way, it also functions, overall, as a diary of perception by the editor. Multiple essays and poems by editor and compiler, Matthew Brendan Clark (sometimes as Comte Computer) exist, woven in and out of the shards, helping to guide this aspect. The rare essay The Hieroglyphic Monad by Michel Leiris, an ode to the Mysteries and language at once, all for your lovey-dovey pleasure, with more poems, essays and extracts supporting the nature of this book, all making up a surprising and new, totally accidental and fully-charged aesthetics treatise, that is FULL OF SUGGESTIONS WHERE TO TAKE THIS ART FORWARD FROM without spelling it out (certainly not in all caps).  Cathode Love seems to be loving "the language of aesthetics and meaning" with an open and suggestive embrace, full of black warmth, allowing all light to penetrate inside it. From the aesthetic and theatrical semiotic theory of Artaud and Michel Leiris and the poetry of renegade surrealist and true "Black Mirror", Roger Gilbert-Lecomte, to the transfigured lettering found in the work of Saint Pol Roux, or overarching symbolic curatorial aspect of Remy de Gourmont, CATHODE LOVE IS LOVING ALL WAYS NOW.  Take advantage of these readings.  They are here now.

The LP includes the first ever issuance of the hypnotic and elliptical soundtrack to Jess Franco's masterful Les possèdèes du diable (Lorna...The Exorcist), by Andre Bènichou, as well as the first vinyl release of Jean Rollin soundtracks to La nuit des traquèes (Night of the Hunted) and Les Raisins De La Mort! (Grapes of Death). Also, accompanying the exclusive interview with Catherine Ribeiro in the book is the epic, 25-minute Un Jour...La Mort by Catherine Ribeiro + Alpes, the first official issue of this since their 1972 album Paix. The LP is rounded out by key selections from Les deux orphelines vampires (Two Orphan Vampires), Ennio Morricone, and Goblin's work for the Suspiria soundtrack.

Many of these selections are issued for the first time ever on vinyl, and were all sourced from the best available elements and remastered for vinyl at Chicago Mastering Service by Jason Ward. LP housed in jacket featuring Parsifal by Jean Delville."